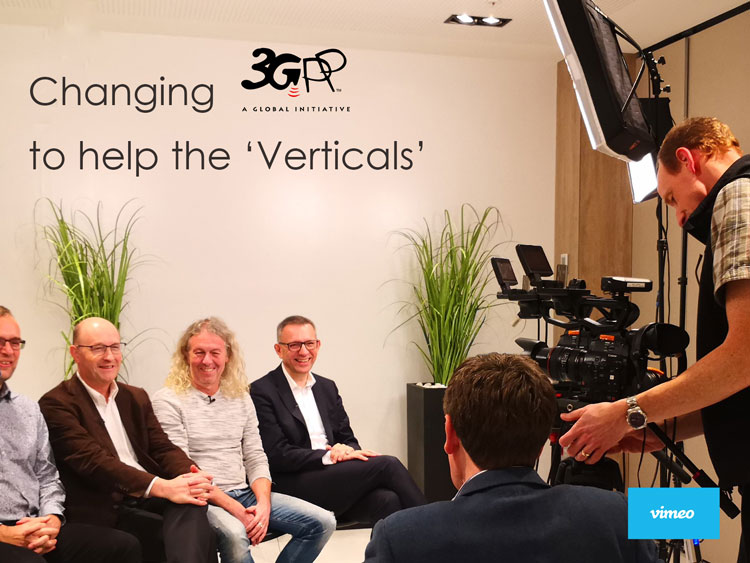 At the December 2019 3GPP Plenary in Sitges, three sector specialists joined TSG SA Chair, Georg Mayer, for a panel discussion on their first-hand experiences on 5G standardisation, looking at where we stand today and what further steps are needed to support industry verticals. The panellists were:

While the sector panellists share some frank views on the difficulties encountered and persisting frustrations, they also offer some clues on how new verticals don't have to start from scratch and how 3GPP is evolving to cater to the needs of verticals.

Takeaway #1: A growing range of stakeholders and requirements

The panellists come with diverse perspectives, from the wireless factory, which is practically in one location, satellites in the sky that offer, rather than use, services, and broadcasting services with smartphones and a huge amount of devices. Traditional members such as operators, chipset vendors and network vendors may all have common interests but they have different voices.

3GPP needs to look at all their requirements. Starting with individual industries, we see what is needed on a very high level through the documents they produce. This is the first phase: Requirements and is typically done in SA1. The next phase is technical, looking at how these requirements fit in to the architecture of the global mobile network. This is more complex as 3GPP has different working groups dealing with this aspect. This is usually very challenging for newcomers, requiring more people and a different focus within individual WGs. There is still a lot to do to educate new people but also the established delegates, who are used to certain ways of working but which these need to become more flexible.

Takeaway #2: Learning from the experiences of industry verticals

Roland highlighted that sometimes the lessons learned have been hard lessons. A vertical coming from outside, speaking a different language from a different ecosystem makes it hard from the outset to understand the workings of 3GPP. The difficulty starts with the how documents are dealt with. The process in 3GPP is also very complicated for an outsider. What is needed is to educate the verticals, take them by the hand and lead them through the process and show them the standards specialists that can help them. In this respect, the right steps have now been taken.

Nicolas also agreed that the 3GPP is very complex, with each group having its own process. To avoid facing a huge amount of work, verticals could appoint someone already familiar with the 3GPP process. However, there is no easy answer to solve this complexity.

Joachim pointed out another challenge about the number of resources required to get the work done, including sending staff to 3GPP meetings across the globe. This is even more challenging for those companies that don't have the muscle to bring in many sectors specialists. There is no easy way to change the 3GPP structure, but finding ways to lower the entry threshold for companies with fewer resources would help increase the representation of verticals within 3GPP.

Georg expained that 3GPP is taking steps to change its processes in a way that will cater for the new voices coming in. This is a stepwise approach.

Support mechanisms include a newcomers session at the bigger 3GPP plenaries and/or larger meetings. These give any newcomer a high-level overview of 3GPP and a chance to interact with standards specialists.

On the newcomers side, it's important to break down the big vision into smaller chunks that are more manageable, taking time to get acquainted with the process structure across the 3GPP WGs. Reducing requirements to an amount that can be handled, reduces the amount of effort required to take the work forward.

Regarding the amount of resources, 5-6 people able and willing to travel to meetings across the globe should suffice. It's important to socialise with people that are from completely different industries. This is how you get things done.

Takeaway #4: Understanding what is already standardised

Nicolas explained that the starting point for NTN was a study evaluating what impact the support of these kinds of network would have on the 5G system. Commitment to 3GPP has helped us understand that the work needed is not as extensive as we expected and the specific features that need to be developed. Thales Alenia Space is very satisifed with this work and is now we going to continue with the normative phase.

Joachim noted that the standardisation work on cyber-physical systems is supported by 5G-ACIA, the 5G Alliance for Connected Industry and Automation, which is also a market representation partner of 3GPP. He highlighted that there are also several requirements common across other verticals where synergies can be created. Each vertical has its own language and business model but their communication technology can be very much the same. This means that 3GPP can cover around 90% common features without having to construct expensive architectural solutions for each verticals.

Nicolas highlighted the importance of interaction. Being part of 3GPP is about integrating existing technology with cellular and that means working together to build new features and the 5G system. While it took some time to understand each other, what we see in the end is the enormous value of exchanging technical ideas and finding ways to solve problems that are different in cellular compared to satellite. Ultimately, it's about mixing the two to get the best of both.

Roland concurs that timelines and processes can be a burden for verticals. However, these could be lowered if the traditional 3GPP delegates also learn from the verticals, understand what they are and how they work and see the value of having them as part of the 3GPP ecosystem.

In conclusion, all sides need to work together, pinpoint common requirements that have already been covered, and new ones that thrive through higher consensus across the verticals and the mobile communications industry.

The video from the December plenary is available here.